Blurring the Lines Between iPhone and iPad

As you’ll hear on this Monday’s episode of Release Notes, some of the new features of iOS 8 have me wondering about the future. Based on what we saw at WWDC, it seems pretty clear that Apple intends to introduce devices this fall with screens of different dimensions. The introduction of size classes and other features all point in this direction. The rumor mill has also been hinting at larger iPhones for some time. In particular, rumors have been flying about a new iPhone that will come in both 4.7-inch and 5.5-inch sizes. No one knows for sure what Apple has planned, but at this point I think the rumors of a larger phone are likely true. Assuming that’s the case, what might that mean for the iOS ecosystem? 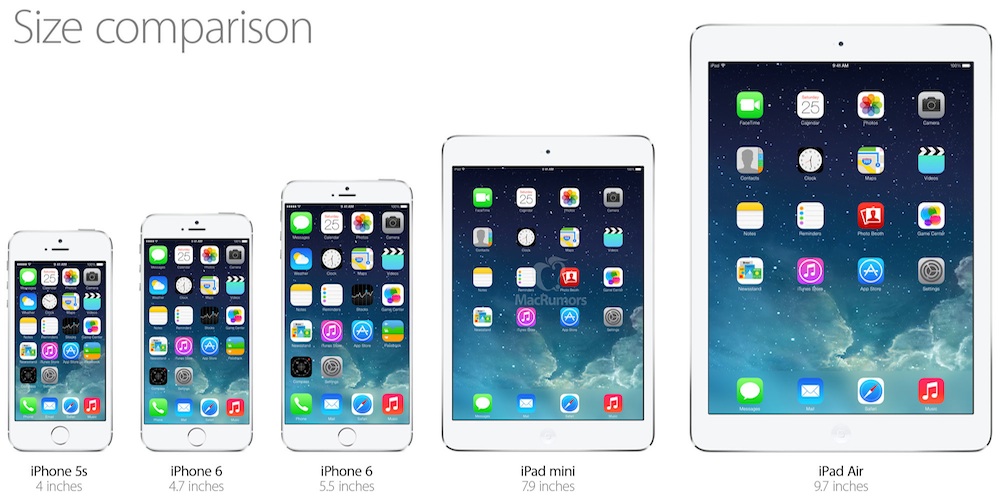 The most obvious change, as this image from MacRumors makes clear, is that we would no longer be dealing with two distinct device sizes as we have to this point. Instead, the addition of a 4.7-inch and 5.5-inch iPhone would blur the lines between “iPhone-size” and “iPad-size” devices. We’d have a spectrum of sizes, with the 5.5-inch iPhone almost the size of the iPad mini. In fact, a 5.5-inch iPhone in landscape mode might actually be wider than an iPad mini in portrait.

As the lines between “iPhone-size devices” and “iPad-size devices” blur, interface conventions might blur as well. Taking the assumed 5.5-inch iPhone as an example, it might have a “compact” horizontal size class in portrait mode, and therefore conform to the interface conventions that we today associate with the iPhone (e.g. single table view presentations, no popovers). In landscape, it might have a “regular” horizontal size class and take on some interface conventions that we today associate with the iPad (e.g. split view controllers with both a master and detail view). In short, the bright line that has always existed in the minds of developers between an iPhone interface and an iPad interface may start to become not so distinct. And this is where things start to get really interesting from a business perspective.

Since the introduction of the iPad, Apple has consistently pushed developers to create “Universal apps,” or apps that run on both the iPhone and the iPad with a single purchase. A lot of developers view that as leaving money on the table, though. Today in the App Store, it’s not uncommon to find the same app present in both iPhone and iPad flavors that are available for separate purchase. This is especially true in the Productivity category, where top apps such as OmniFocus, Things, Launch Center Pro, and even my own apps are available with separate versions intended for the iPhone and iPad.

Having separate iPhone and iPad versions makes perfect sense from the perspective of a developer. It takes effort to provide a great experience on both the iPhone and iPad. Why shouldn’t we be compensated for the extra value that we provide? Contributing to that line of thinking has been the clear dichotomy between the iPhone and the iPad. Up until now, the iPhone interface was seen only on the iPhone, and the iPad interface was seen only on the iPad. As a result, it was a fairly straightforward to explain to customers why they had to purchase an app twice: “They’re two different devices.”

Developers who currently sell separate iPhone and iPad versions of their apps would be well advised to start thinking about how they plan to handle the blurring of lines between these devices. If your customers no longer see a difference between the iPhone and iPad, how will you justify to them the need for separate purchases? If Apple no longer sees a clear dichotomy between the iPhone and iPad, might they no longer accept app updates that are not Universal? If you find yourself in the position of having to give away what you once were paid for, how will you make up the lost revenue? I don’t have answers to these questions, but I’m convinced that I need to find some. Maybe sooner than I’d like.