The Shape of the App Store

Every developer knows how tough it can be to make a living on the App Store. There’s a lot of money being made there, but it’s not spread very evenly. Those at the top of the charts make the lion’s share of revenue, while the vast majority are left to fight over the scraps. But exactly how lopsided is it? And how does that affect an indie developer’s chances of finding success? For a long time, I was resigned to never really knowing the answers to these questions, because although there’s wide consensus that the distribution of revenue in the App Store is best represented by a power law, I had no way of knowing how sharply or gently the graph of that power law curved. My own apps haven’t spent enough time on the Top Grossing list to collect the data I would need to make a prediction, and Apple sure isn’t sharing it.

And then on January 15, Marco Arment gave me (well, all of us) a belated Christmas present. In his piece titled Overcast’s 2014 Sales Numbers, Marco shared the financial performance of his podcast player, Overcast, through a series of statistics and graphs. Because the information he shared was so detailed, and because Overcast has been so successful, I realized that Marco’s post could provide some insight into how an app’s rank on the U.S. Top Grossing list correlates with its daily revenue.

Before we get to the results, it’s important to first discuss their limitations. The figures that Marco provided for Overcast were very detailed, including daily revenue information, but they weren’t complete. Of particular importance, the revenue figures that Marco published were for global revenue. There was no breakdown of the revenue provided by nation. This means that it’s possible only to compare rank in the U.S. App Store to global revenue. It’s not a perfect apples to apples comparison, but since the U.S. App Store is the largest national App Store both by downloads and by revenue, I think it’s a reasonable comparison to make.

To provide some context to the results, you may be familiar with the Pareto distribution. It’s the origin of the classic “80-20 rule” that’s used to explain so many phenomena that obey a power law. “Twenty percent of the people in an organization do eighty percent of the work.” “Twenty percent of the population control eighty percent of the wealth.” You hear these types of statistics a lot, but they’re usually not very accurate. Often, they are useful as a first estimate at best. So I didn’t actually expect App Store revenue to obey the 80-20 rule. In fact, I expected it to be a much sharper curve, representing even greater disparity in the distribution of revenue than the 80-20 rule would suggest – maybe a 90-10 split, or even a 95-5 split. As it turns out, the revenue distribution curve of the App Store is even sharper than I imagined. 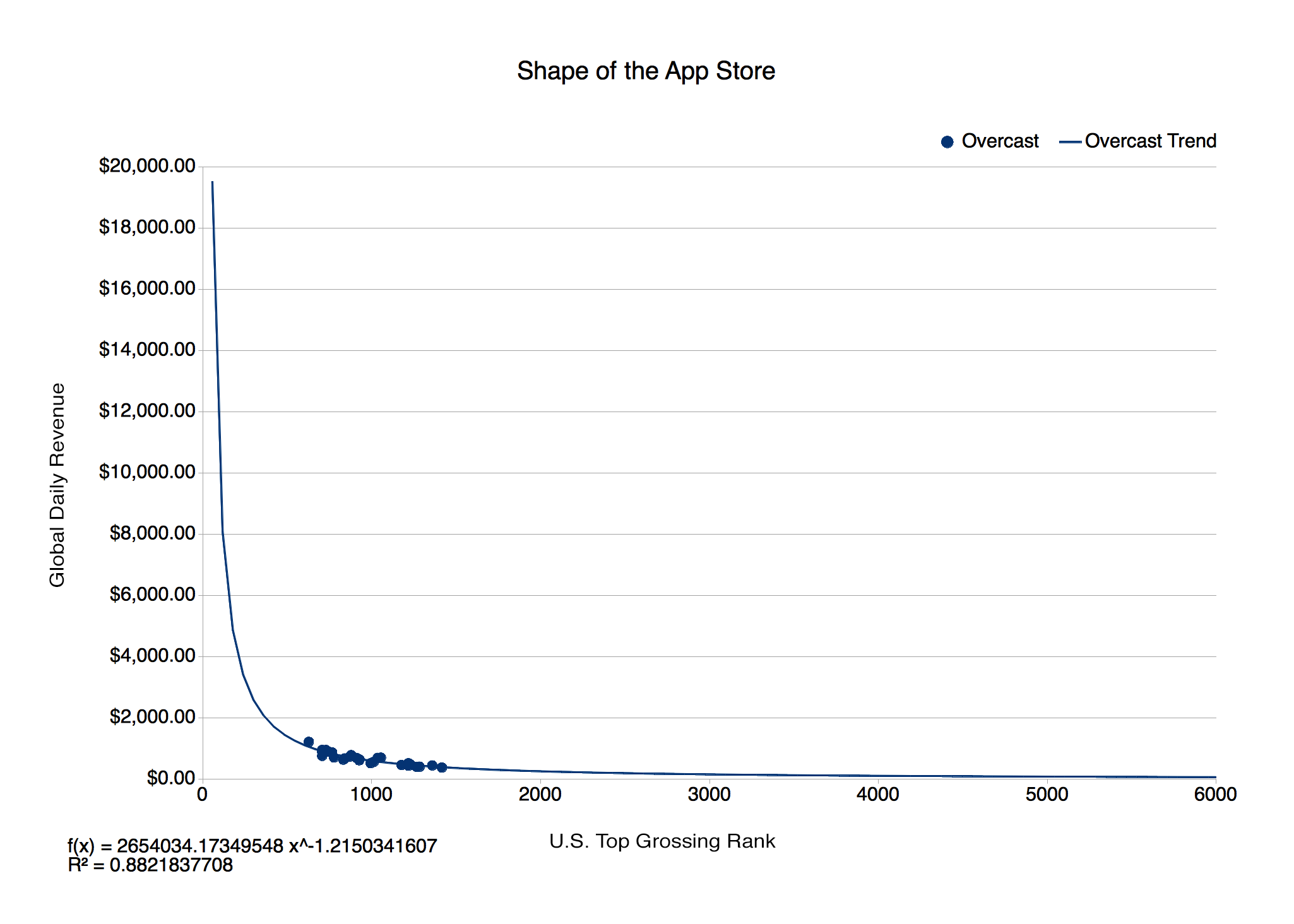 Now, all of that is not to suggest that it’s easy to build a sustainable app business. It’s not. But, by doing some basic business things right – like finding a profitable niche, solving a painful problem, effectively marketing apps, and generally doing the things that have been suggested time and again at conferences and on podcasts – a developer can dramatically increase his odds of out performing the multitudes that just slap any old thing up on the App Store and hope for the best.

So, with even fewer people than I expected making “yacht and helicopter money” in the App Store, I remain hopeful for my fellow developers. There’s a lot money circulating in the ecosystem, and a developer operating at indie scale only needs a little bit of it. It seems that even with the revenue curve tilted so heavily towards the big hits, the shape of the App Store still allows room for sustainable businesses to develop in the long tail. It seems that developers who work hard, mind the details, and treat their business like a business have a real chance of making it.

Note: I’ve posted a follow-up to this article titled, The Shape of the App Store, Redux that responds to some valid criticism that’s been received regarding the data set used here.

Update Jan 20, 2015: This post was updated to clarify that an app’s rank in the U.S. Top Grossing list is being compared to its global revenue.