If you’re a U.S. taxpayer with apps on the iOS or Mac App Store, you may have received from Apple a Form 1099-K, Payment Card and Third Party Network Transactions, which reports to the IRS your gross revenue from App Store sales. You may have also noticed that the amount reported on your Form 1099-K doesn’t bear much resemblance to the payments actually received from Apple.

There are a couple different reasons the amount Apple reported might not match the amount you received. First, the payments that are reported on From 1099-K are gross payments that you received before taxes, fees, and (notably) Apple’s 30% cut. Second, the amount on your Form 1099-K may not represent your worldwide revenue. Apple only reports revenue on Form 1099-K for regions that have more than 200 payments and more than $20,000 in total gross payments in the year. Because the thresholds are reached on a region-by-region basis, you may exceed those thresholds (and thus have your revenue reported on a Form 1099-K) for the U.S. and Euro Zone, for example, but not in India or Russia.

As you can see, it all gets very complicated, very quickly. In theory, the amounts reported by Apple on Form 1099-K should be able to be reconciled to payments received from Apple using the financial reports available in iTunesConnect (since those reports list every sale, its region, fees, currency conversions, and more), but in practice this is a task that is beyond most developers. Most independent developers I know look at the Form 1099-K when it arrives, scratch their heads a bit, and then move on.

The problem with that, of course, is that Form 1099-K is an official tax document that is sent to the IRS, and when the IRS sees an amount of revenue reported, it expects to receive tax on that amount. So if you find yourself in the situation where the amount reported to the IRS on Form 1099-K is more than the amount you reported on your income tax return, you can expect that some questions will be asked. You might even find yourself with an extra tax bill.

Apple only began issuing Form 1099-K to App Store sellers starting with the 2013 tax year. (Affected developers would have received their first Form 1099-K in January 2014.) So until recently, any problems that developers may have faced because of discrepancies between amounts reported to the IRS by Apple and those self-reported by the developer were only theoretical. That may be starting to change, though: 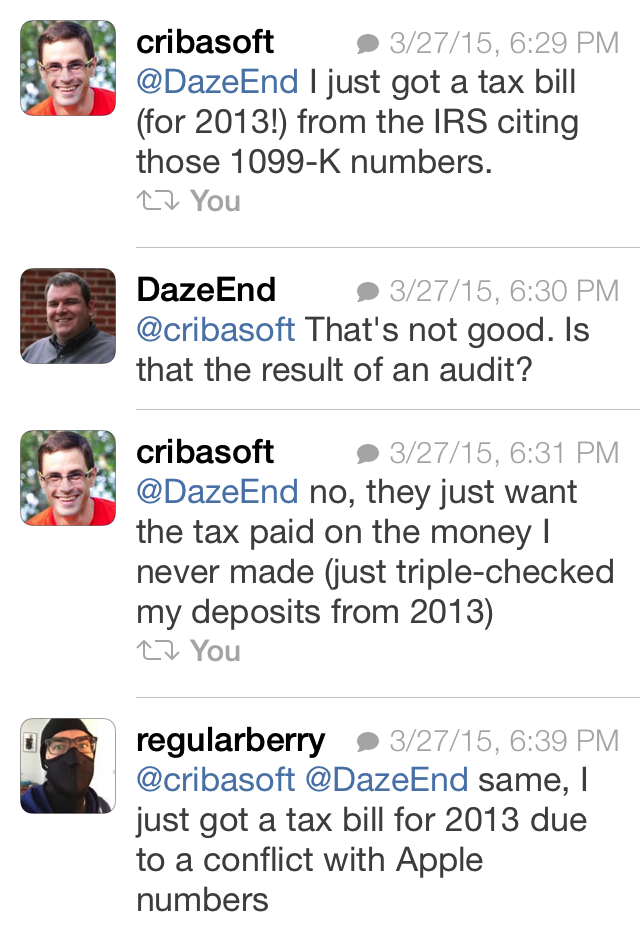 So what’s a confused developer to do? How should you deal with a Form 1099-K that doesn’t seem to match your payments from Apple? Well, first of all, get yourself a good accountant if you don’t already have one. I recommend finding a Certified Public Accountant that deals regularly with small businesses. You might also want to start reporting your revenue gross with an offsetting expense, instead of net. In other words, instead of recording a $7,000 payment in your books, you might want to record $10,000 in revenue with a $3,000 expense that represents Apple’s 30%. This should prevent the troublesome situation where Apple reports more revenue to the IRS than you do. As always, though, don’t take my word for it. Ask your accountant.